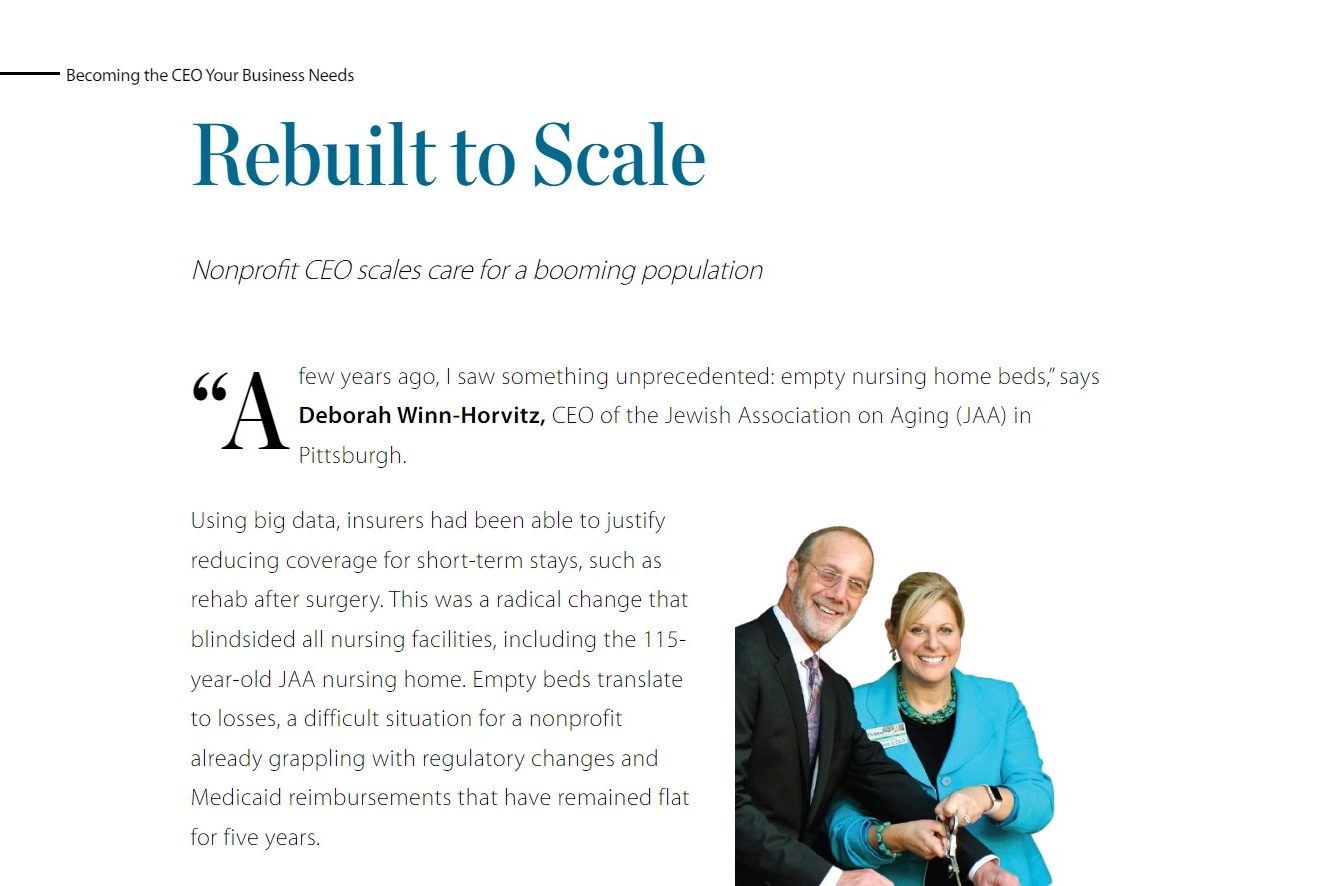 “A few years ago, I saw something unprecedented: empty nursing home beds,” says Deborah Winn-Horvitz, CEO of the Jewish Association on Aging (JAA) in Pittsburgh.

Using big data, insurers had been able to justify reducing coverage for short-term stays, such as rehab after surgery. This was a radical change that blindsided all nursing facilities, including the 115-year-old JAA nursing home. Empty beds translate to losses, a difficult situation for a nonprofit already grappling with regulatory changes and Medicaid reimbursements that have remained flat for five years.

JAA serves people of all faiths and all income levels. And it has more demands than ever. Pittsburgh sits in Allegheny County, home to one of the oldest populations in the U.S., second only to the residents of Miami-Dade.

Winn-Horvitz saw the need to diversify JAA’s services and radically reorient its growth strategy. “Although it was obvious we had to move in a new direction,” Winn-Horvitz says, “it wasn’t a trivial decision.”

Situation
Nonprofit needs to serve a rapidly growing population of seniors while grappling with regulatory and reimbursement changes.
Challenge to the business
Launch a transformational strategic plan that diversifies and scales offerings to serve seniors while maintaining quality care.
Leadership growth
Managing large-scale change through a board of directors and a 500-person staff.
Results
Setting the foundation for transformation

Thankfully, when Winn-Horvitz joined the JAA in 2012, she started projects that would enable JAA to not just pivot from nursing homes but to grow while doing it. One of her first moves was to create a development department that could run sustained fundraising.
JAA proceeded to launch a firstever capital campaign in support of a new strategic plan. It has raised $14 million over three years — the most of any individual Jewish service organization in Pittsburgh’s history. The money funded AHAVA Memory Care Center of Excellence, Pittsburgh’s first new center in 20 years dedicated to the treatment of Alzheimer’s disease and other forms of dementia, as well as beginning a much-needed endowment.

“As responsible stewards of this money, we made the strategic decision to retrofit existing nursing home space for the memory care center, rather than start new construction,” Winn-Horvitz says. The center opened in 2017, and has since earned accolades and operated at capacity. The residence is necessary, not just because of the high rates of Alzheimer’s, but because patients with the disease will almost inevitably require assisted living. 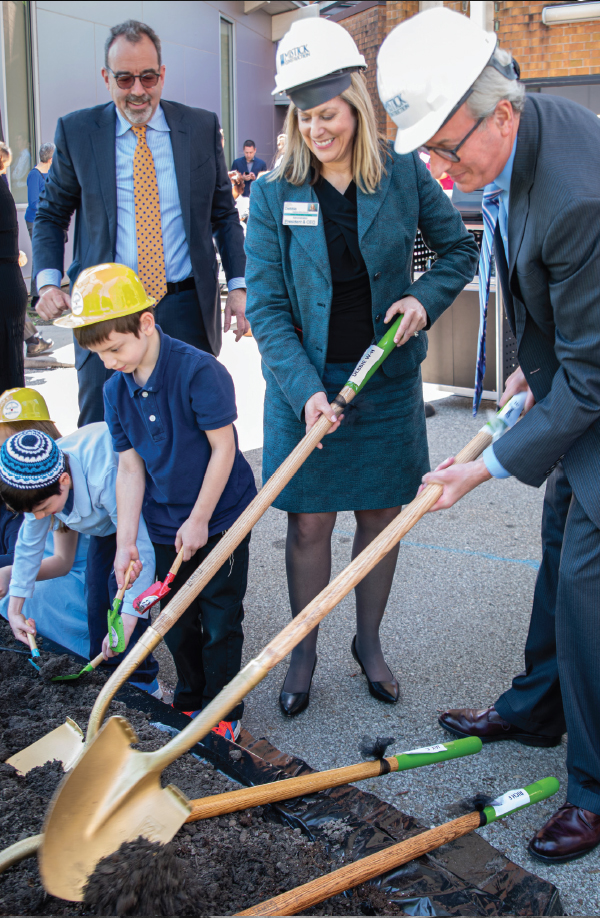 Winn-Horvitz breaks ground on The New Riverview renovation in May 2019.
Shifting from on-site to at-home care

Winn-Horvitz has managed the transition from predominantly onsite care to at-home care, meeting the preference of baby boomers who prefer to age in their own homes. This effort required her to digitally transform key services, implement new care programs and acquire senior living facilities. She has overseen the transition to an electronic medical records system that provides consistent tracking of patients in and outside of JAA’s facilities. To expedite nursing visits, JAA collaborated with Carnegie Mellon University to pilot a wireless call bell system that gives the nurse succinct information about a patient’s location and needs. JAA also has introduced remote doctor’s visits through telemedicine.

To improve quality of care, Winn-Horvitz has spearheaded several new services to help seniors navigate the complexities of late-life care. She established a new role whose sole responsibility is to help seniors choose the right care options. The White House invited her to speak on JAA’s HomeMeds Medication Management program, which sends a medical professional to review a senior’s medications and his or her home for potential hazards. “Complications from prescription medicine are one of the most common causes of emergency room visits and hospital stays. About half of our reviews turn up one red flag. Patients will receive a generic from the hospital and a name brand from their doctor, and won’t realize they’re taking the same thing twice,” explains Winn-Horvitz.

To bridge JAA and seniors who will require more involved care in the near future, Winn-Horvitz has acquired a largeblock of senior living apartments. “We can start to build relationships with the residents of The New Riverview. And when they need care, JAA’s campus is just a few steps away.” JAA is also finalizing plans to construct a state-of-theart independent living facility on its campus, an “apartment for life” concept for seniors to age in place. 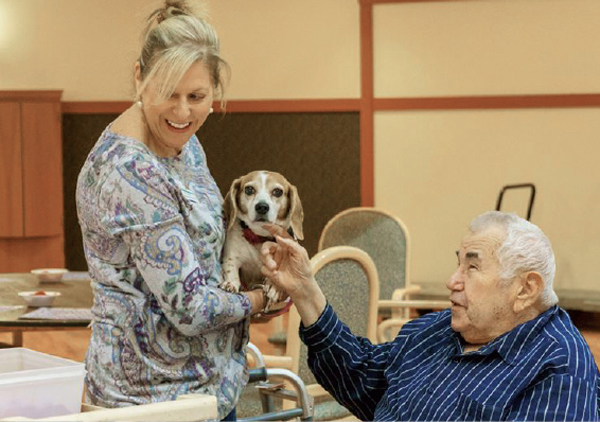 To manage her numerous strategic initiatives, Winn-Horvitz has made significant internal changes at JAA. “My Vistage group reminded me that you need the right people in place to implement the right processes,” Winn-Horvitz says. “Within the last three years, I’ve put in place a new CFO, COO, HR director, development director and marketing/PR director.”

The new leadership has been effective. Despite severe regulatory challenges, JAA has successfully increased lines of business from six to 10. This has resulted in patient growth of 38%, to 4,000 patients per year, and a growth of 25% in the operating budget to $40 million.

Although it was obvious we had to move in a new direction, it wasn’t a trivial decision.

While scaling the organization, Winn- Horvitz has grown in her leadership. Reporting to a board of directors was a first in her career, and she had to take them through the decision-making path so they understood and supported the plan. She also had to communicate the plan to 500 staff members, who worried how the changes might impact their future. Note: JAA was able to retain all positions and move every employee to another area of the business.

Winn-Horvitz says she believes JAA’s next growth phase will almost certainly involve partnering with similarly sized faith-based providers. “It’s becoming impossible for even midsize healthcare firms to survive. At the same time, we don’t want to compromise our mission and values,” she says. “By partnering with similar organizations, we’ll have far more leverage negotiating prices with our vendors and payers, and gain operational efficiencies.”

Looking to the future, Winn-Horvitz acknowledges that the healthcare industry is hard to predict, especially senior care, which ranks near nuclear energy as one of the most heavily regulated in the country. “It’s possible that in a decade we’ll start to see seniors return to nursing homes. Really, the only way we can exert control over our future is to find ways to continue to scale.”

All photos courtesy of JAA 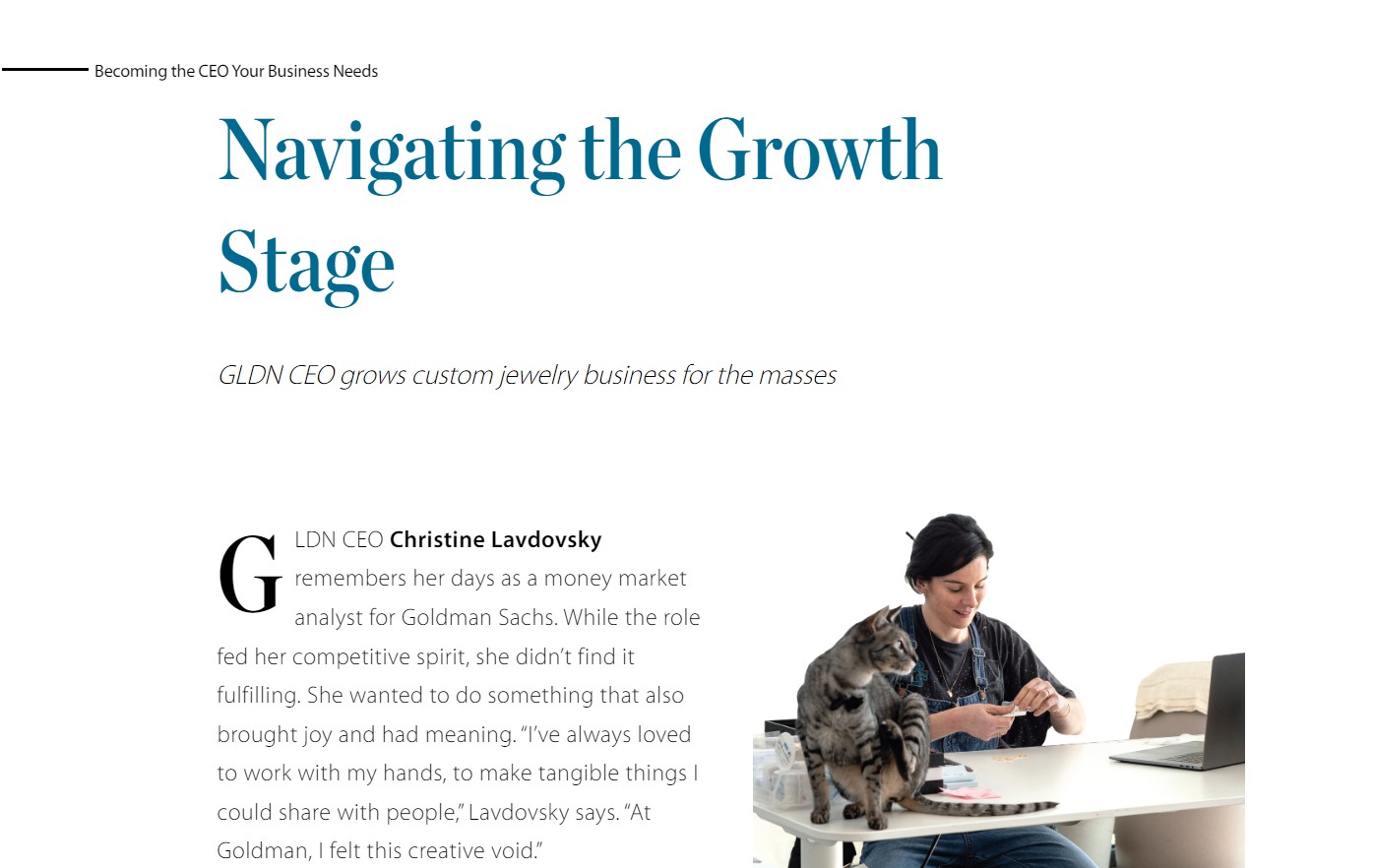 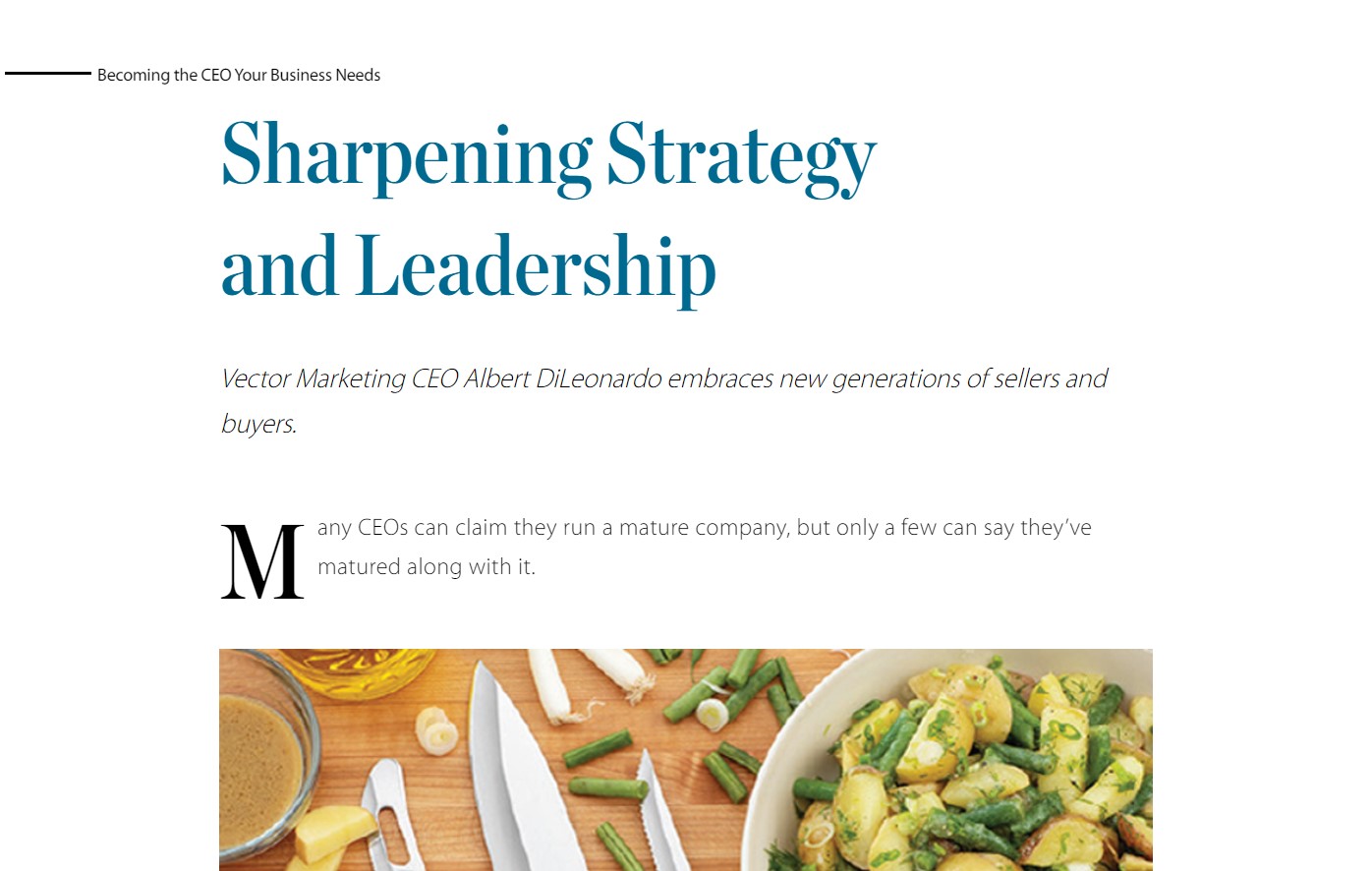 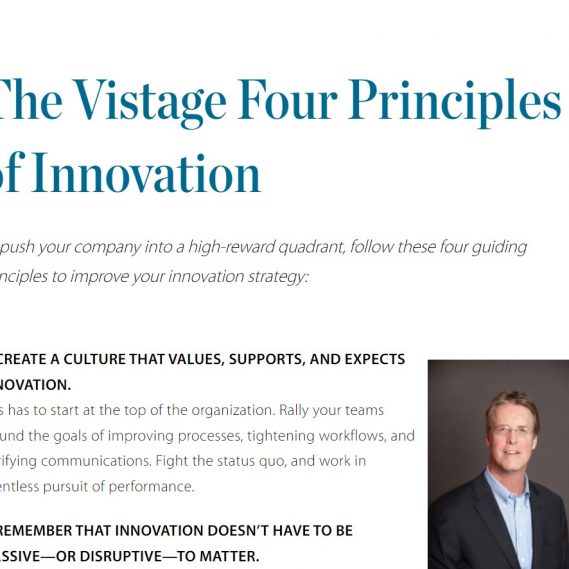 The Vistage Four Principles of Innovation
error: Content is protected !! 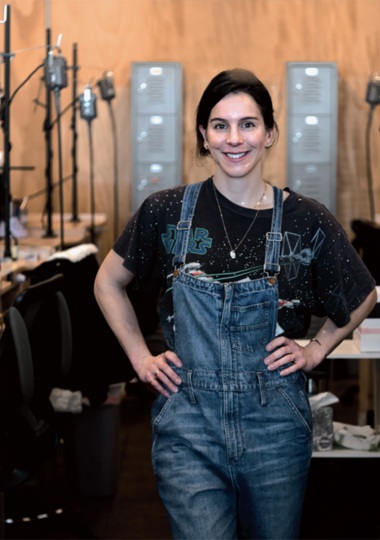 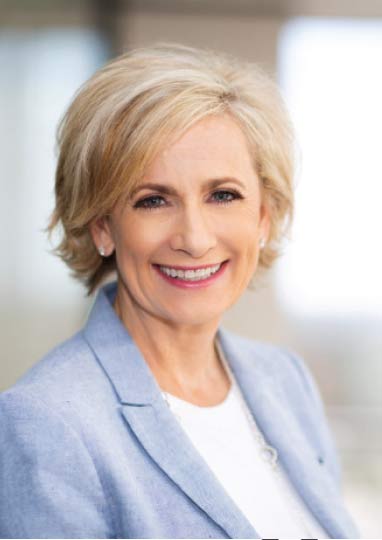 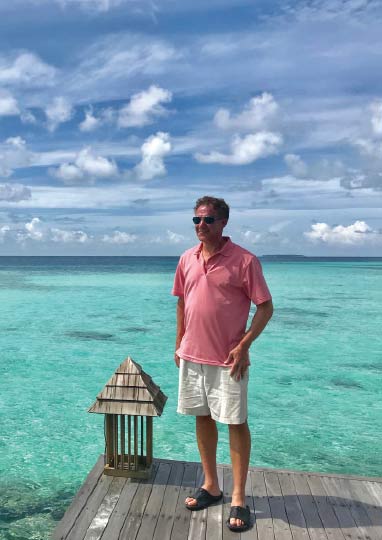